Having flown to Madrid the previous day, our group of five awaited the 9 o'clock pick up by our guide and friend Santiago Villa with anticipation.

The focus of our trip was the endangered Iberian Lynx,but we had been forewarned by Santi that it would be extremely challenging to catch a glimpse of this rare feline,as the decimation of the rabbit population by the Variant Rabbit Hemorrhagic Disease Virus meant that the lynx were ranging further from their usual hunting grounds and recent sightings had been scarce.Unfortunately this proved to be the case, and despite the best efforts of Santi and the group (and those of many other lynx seekers),we were unsuccessful in our quest. However,even allowing for this disappointment the week was to provide many and varied highlights,as I hope this report indicates.

As usual Santi was on time, and having loaded the luggage into the van,we set off for our first main birding stop at Navaseca Lagoon in the La Mancha wetlands.Upon arrival,having already had excellent views of Lesser Kestel en-route, Santi pointed out a Penduline Tit nest,which both birds visited at regular intervals.The lagoon itself held a large number of wildfowl, which included White-headed Duck,Garganey and Red-crested Pochard,as well as good numbers of Black-necked Grebe. Greater Flamingos added colour to the scene,Whiskered Terns flew to and fro,and a Purple Heron was flushed from the reedbed, which also held Purple Swamphen and a Water Rail,which was heard rather than seen.Thirteen species of wader were also seen around the muddy margins and these included Black-winged Stilt,Avocet,Kentish Plover and Little Stint,whilst several Collared Pratincoles flew around the lagoon.

We then proceeded towards our destination of Andjucar, driving through Campo de Calatrava en-route,to add Great and Little Bustards,Black-bellied and Pin-tailed Sandgrouse,Stone Curlew,Calandra Lark and Montagu's Harrier to our growing list of birds.

From here we continued on to the Los Pinos complex,our base for the next four nights.Having settled in to our accommodation and enjoyed an excellent evening meal we called the log,which revealed that we had seen 78 species of birds and heard a further 4 during our first day.A great start.

Leaving the Andjucar area we headed towards our next hotel in the Guadaramma Mountains,stopping again in the La Manch wetlands,this time at La Veguilla and Manjavacar.The journey was brightened by the musical interludes provided by Pam and Jenny,who could seemingly adapt a song to any situation,something which kept us amused throughout the trip.New birds seen in the wetlands included Black-crowned Night Heron,Wood Sandpiper,Bearded Reedling,Great Reed Warbler and an excellent and unexpected male Pied Flycatcher.

Eventually we arrived at our hotel in the town of Cercedilla,Santi having solved the problems posed by the one way system.Whilst exploring the hotel garden before dinner Martin spotted a Short-toed Treecreeper,which up to then had been recorded as heard only.Another excellent dinner was enjoyed by all,after which we retired to have a good nights sleep before facing the challenge of Citril Finch the next day.

The day started well,with Black Redstart,Coal Tit and Firecrest added to our bird list before we left the hotel and headed for our first stop at Navacerrada Pass.This was to be our lucky day,as several Citril Finches were located immediately and great views were had by the whole group,whilst the Spanish Army were put through there paces close by.At one point Santi was approached by an officer,who we thought was trying to enlist him,given Santis' new streamlined figure, but it transpired that he was only advising him of parking restrictions in the area.Other birds seen at this location included numerous obliging Crossbills,Rock Buntings,Serins and a brief Siskin.During the rest of the morning and early afternoon we explored several scenic areas,one of which produced the first Red Kite of the trip,spotted by Pam.

We gradually worked our way towards our last hotel,in the town of Sepulveda.After unloading our luggage,we had time to spend a couple of hours searching for our target bird,Duponts Lark,in the Duraton Natural Park. Upon reaching the site we could hear at least four birds singing,but all were distant,and during the next two hours did not venture nearer to us.We were kept entertained however, by Calandra,Crested,Thekla,Wood and Sky larks,but El Diablo was living up to his reputation.Reluctantly we left the site and returned to our hotel for the final dinner of the trip.However,Martin and Steve still had time to demonstrate the fact that they had never been likely to find a lynx,as on a pre-dinner walk they were even unable to find the town square in the middle of Sepulveda,much to Santis' amusement.

We awoke on our final morning ready to eat an early breakfast and make a concerted effort to see Duponts Lark.Upon arriving at the site we could immediately hear a bird singing close to the road.Our hopes were raised,and it took Santi's sharp eyes only ten minutes to locate the bird, which was singing from the ground some twenty yards from us.We must have watched it for about twenty minutes,all of the group having excellent views. We moved on to San Frutos Hermitage,which was most impressive,and the return walk from the car park to the hermitage produced sightings of Peregrine Falcon and Tawny Pipit,whilst a Spectacled Warbler was heard. From here we returned to our hotel to finish packing and have a cup of coffee before beginning our journey back to Madrid Airport.Several stops were made en-route,one of which allowed Jenny to locate our first viewable Nightingale,another produced Bonellis' Eagle and another an adult Eurasian Eagle Owl with two chicks.

All in all an excellent final day,which was not quite complete for,as Santi drew close to the airport an Osprey flew across the front of the van.A fitting conclusion to a great trip.

Overall,it is true to say,the holiday epitomised all that we have come to expect from a Spainbirds tour.Excellent accommodation,great food and a wide diversity of wildlife from Spanish Ibex to Duponts Lark to Spanish Festoon Butterfly to Great Peacock Moth to Pink Butterfly Orchid,with the missing lynx being saved for another day and another trip.In all 8 species of mammals,153 species of birds (with a further 6 species heard),21 species of butterflies and moths and 2 species of orchids were seen by the group.

Finally, a word of thanks to Santi for making the above possible, and whose wildlife skills are matched only by his people skills... Thanks mate! 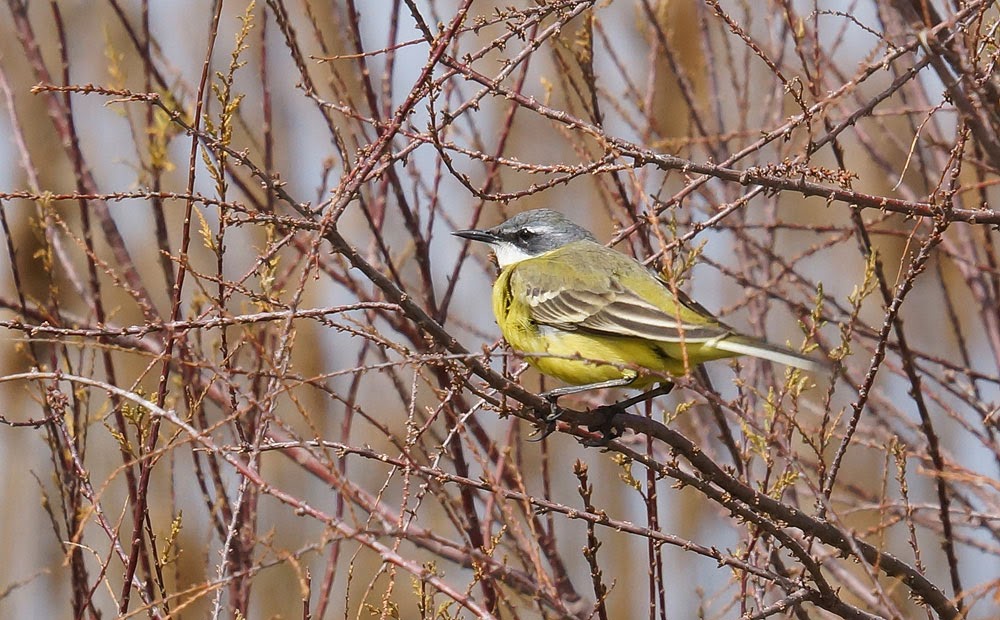 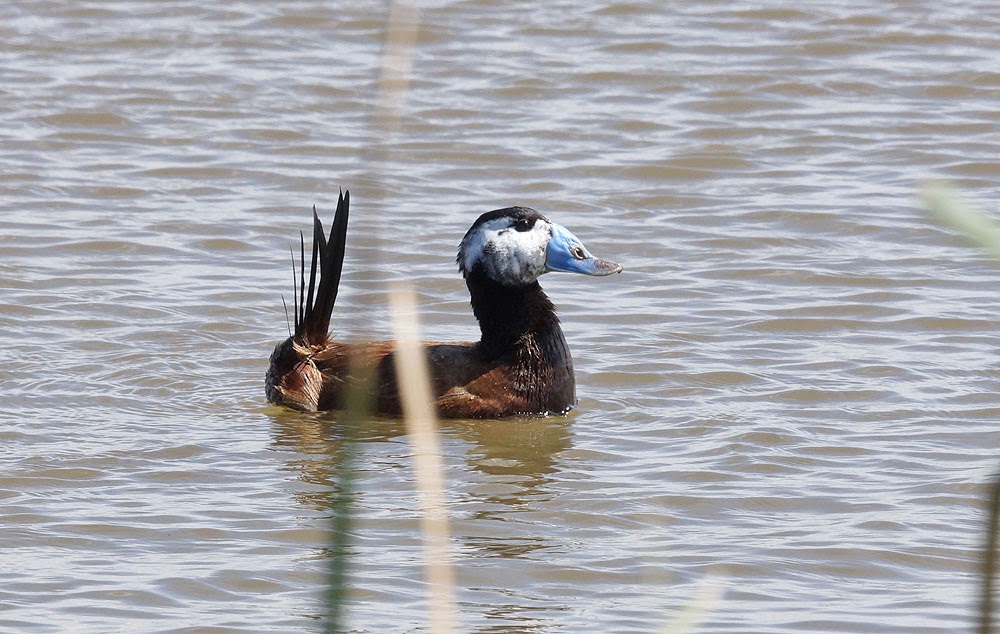 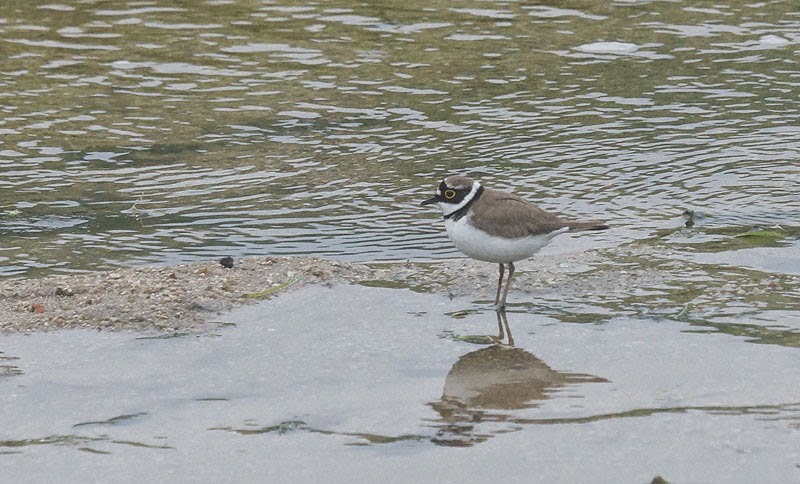 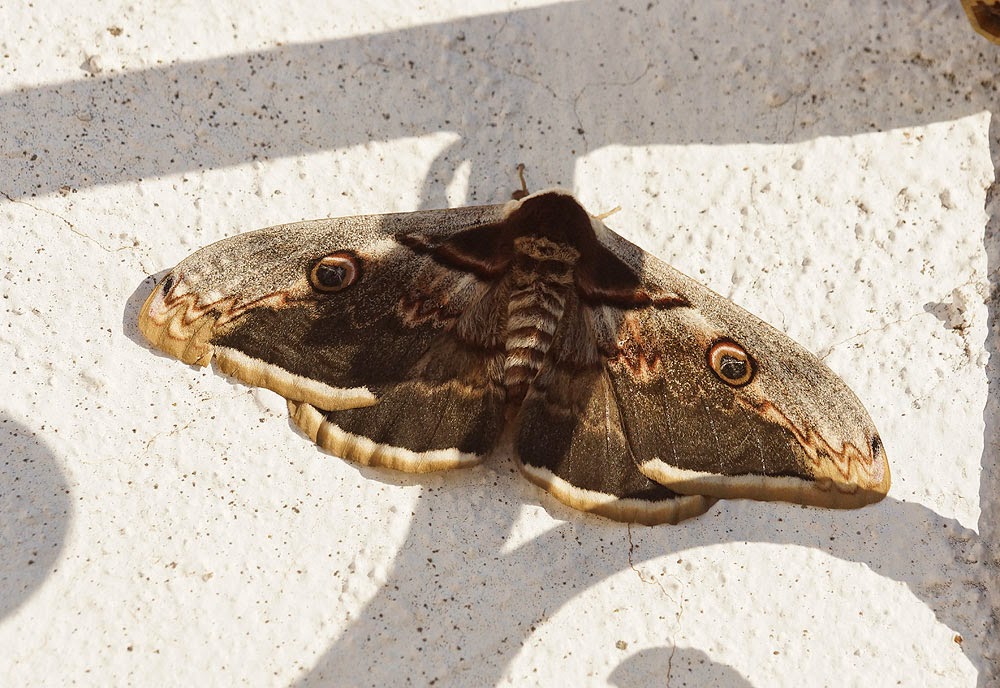 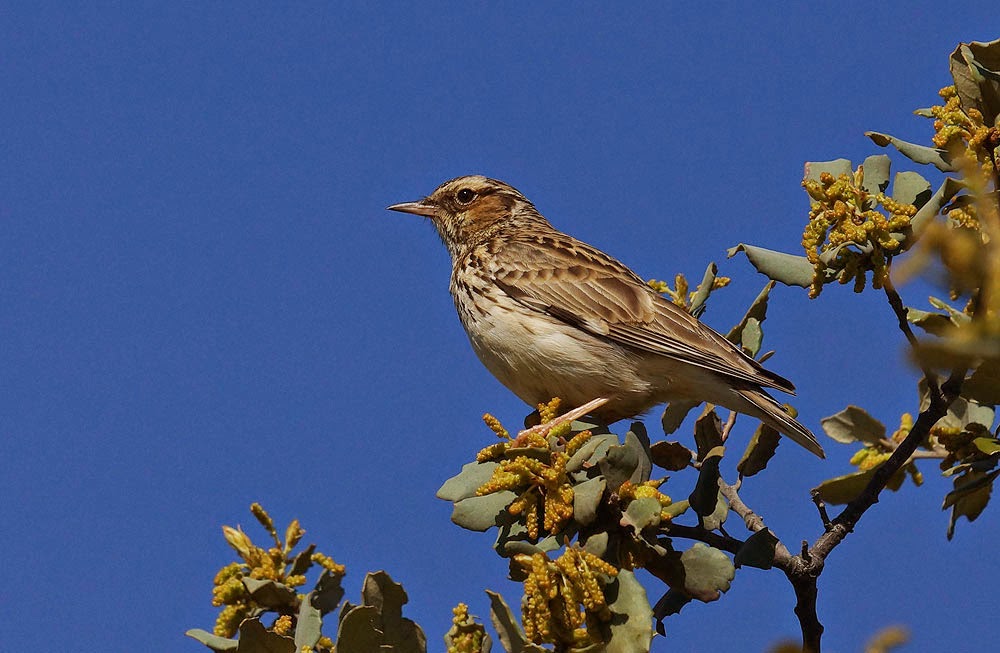 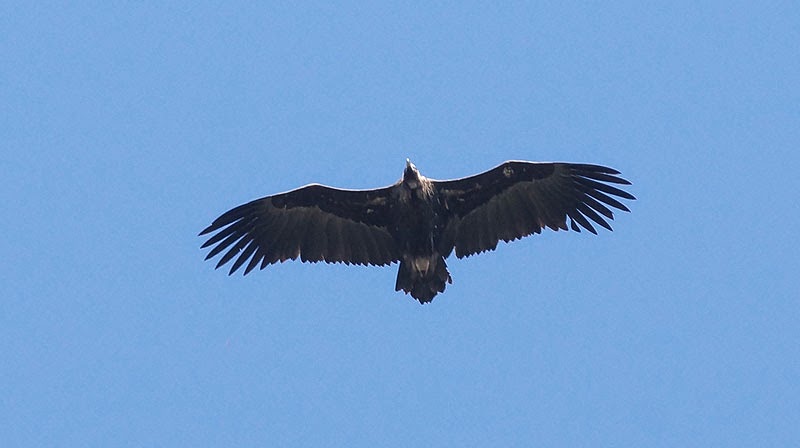 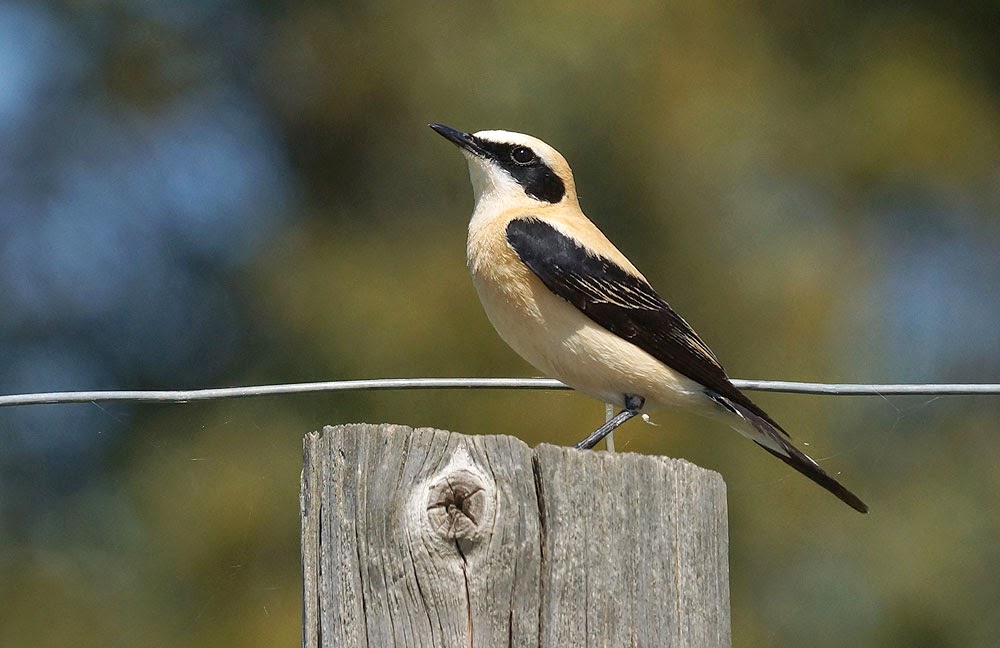 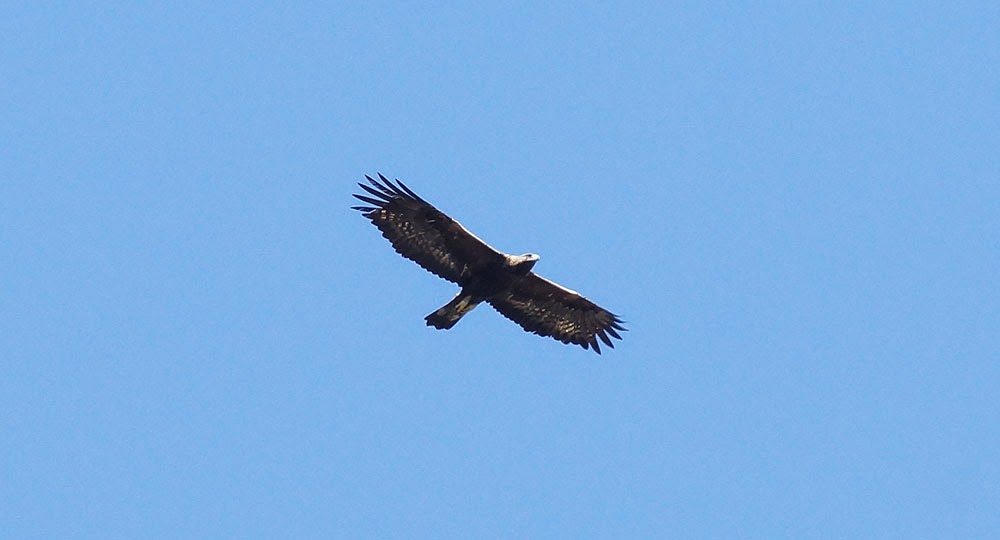 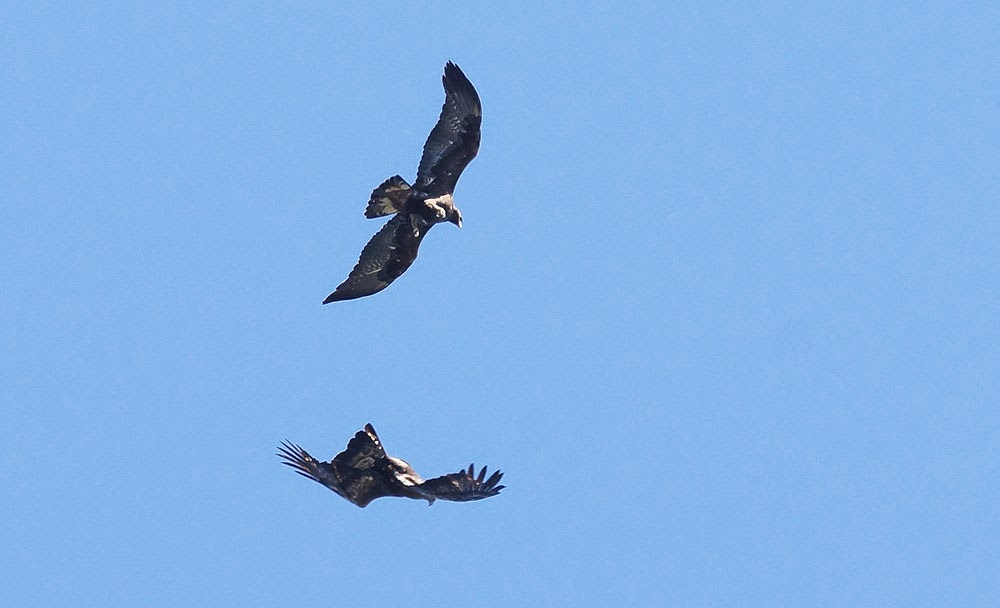 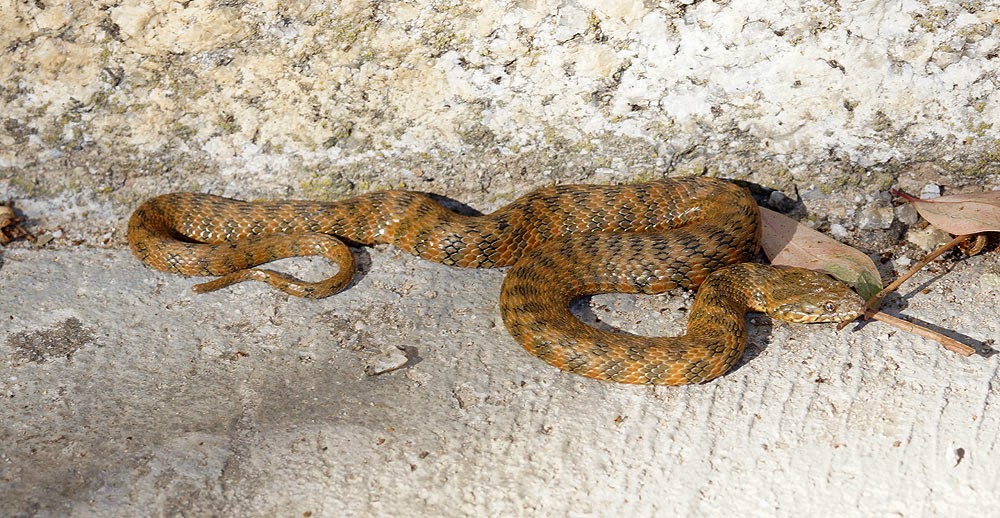 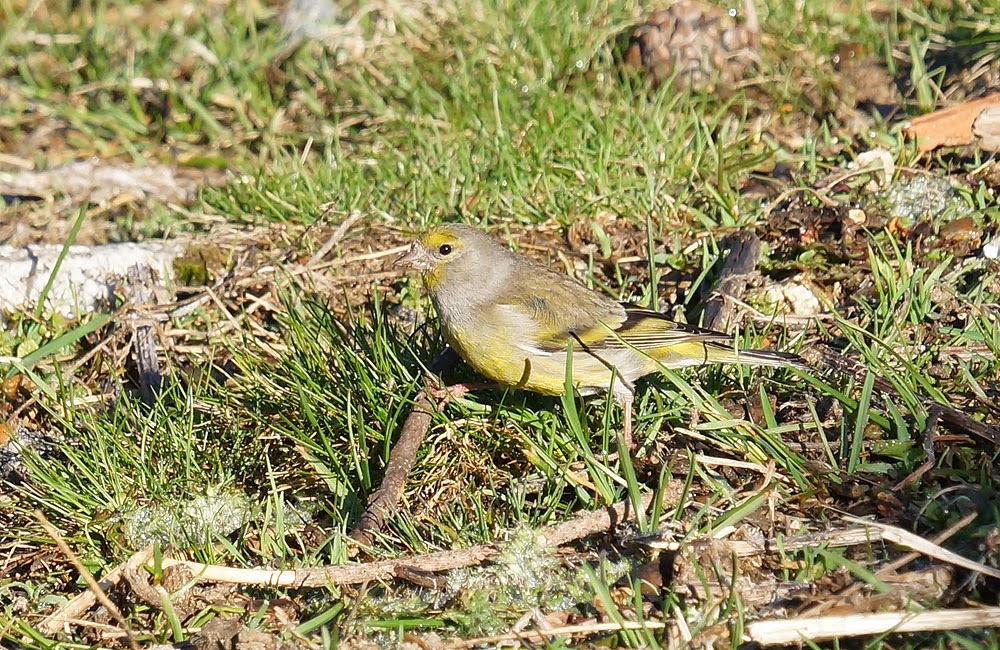 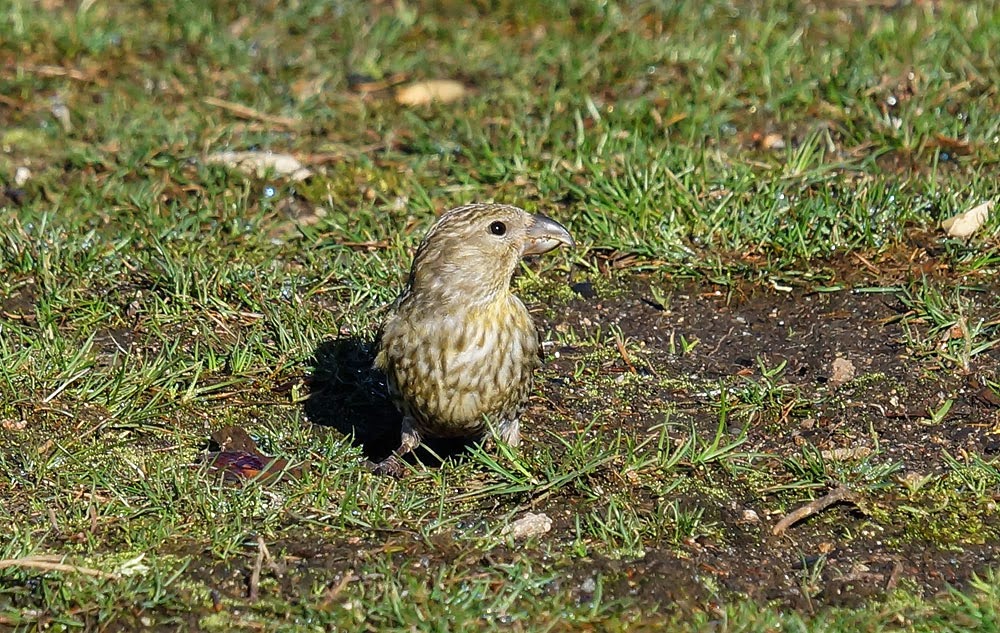 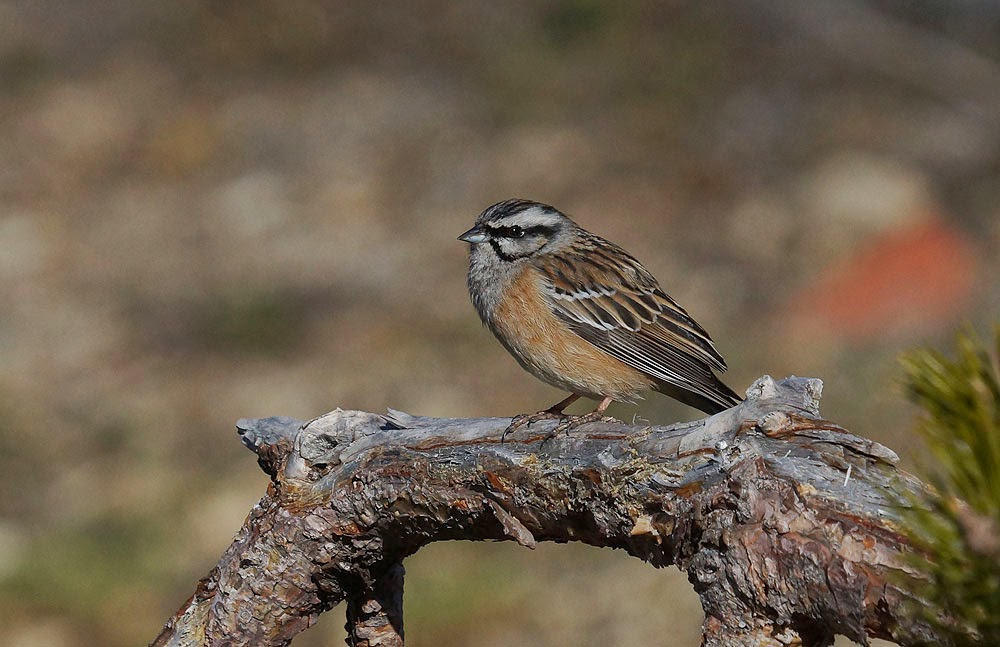 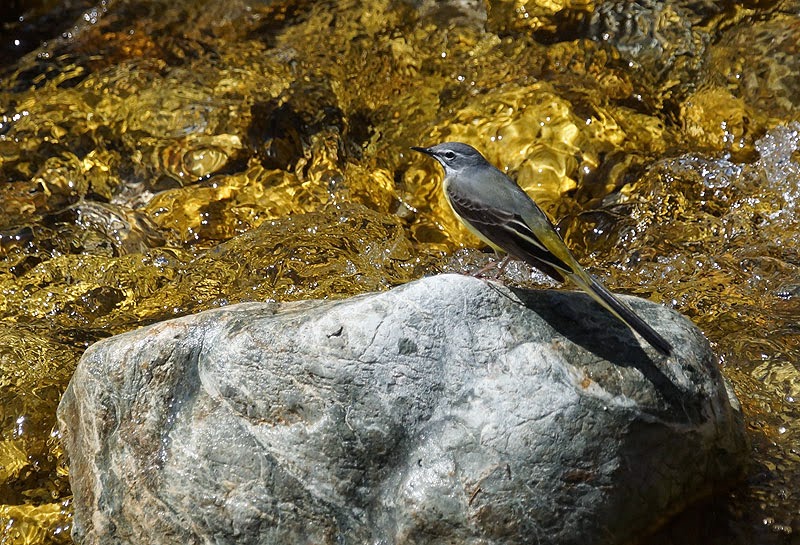 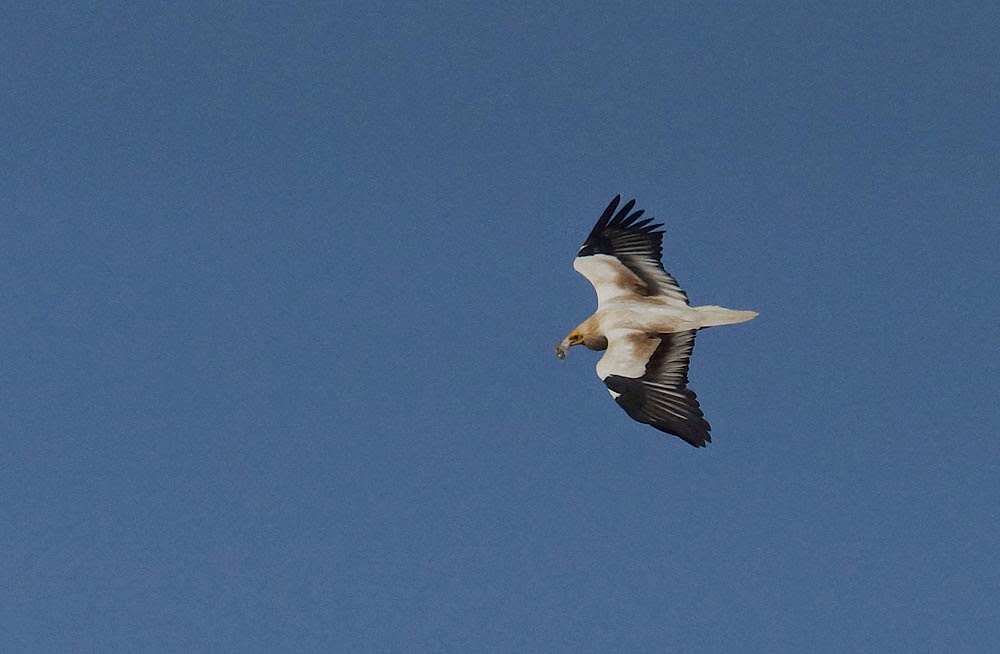 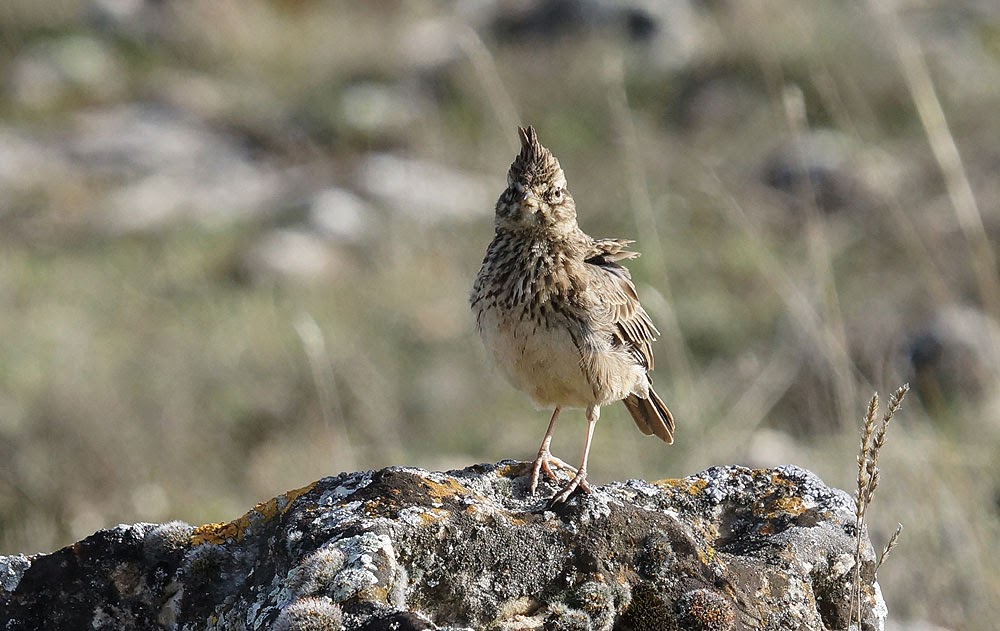 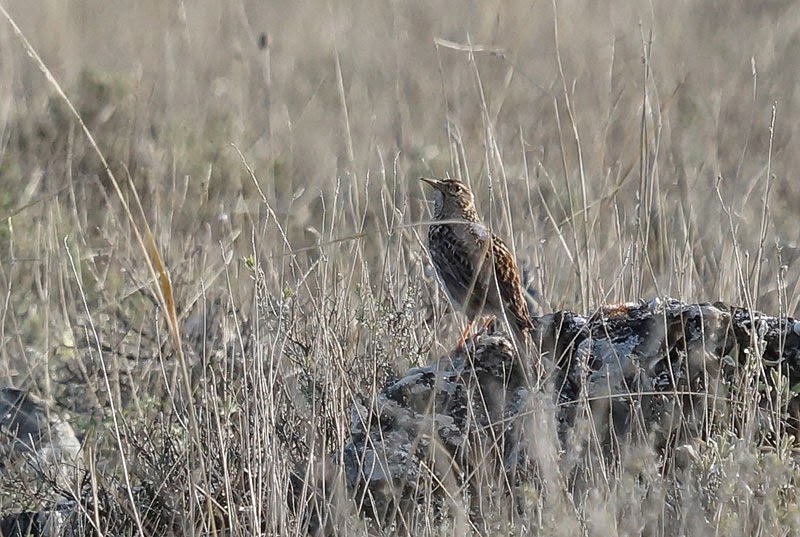 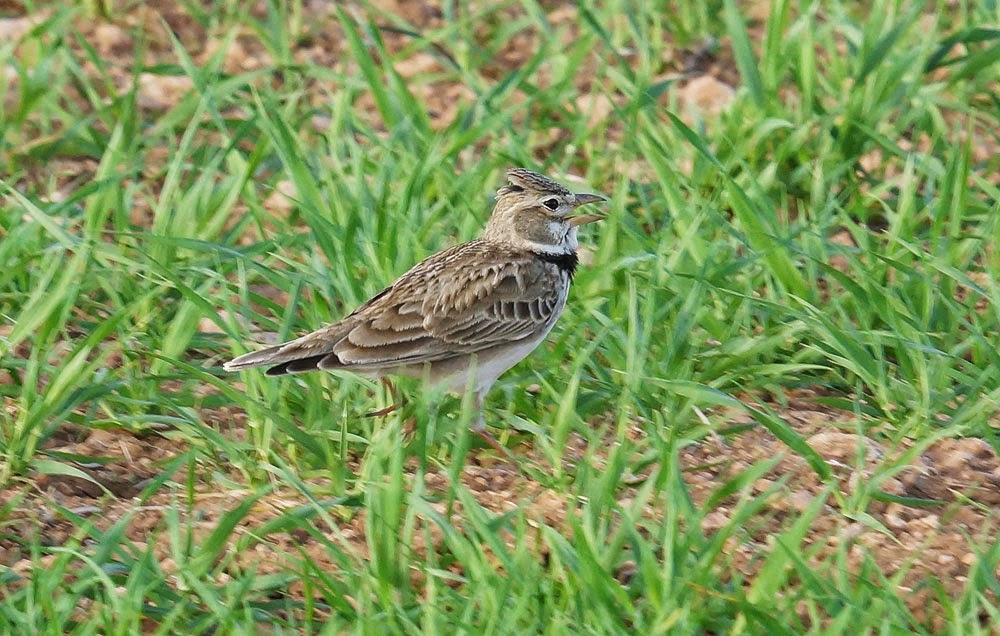 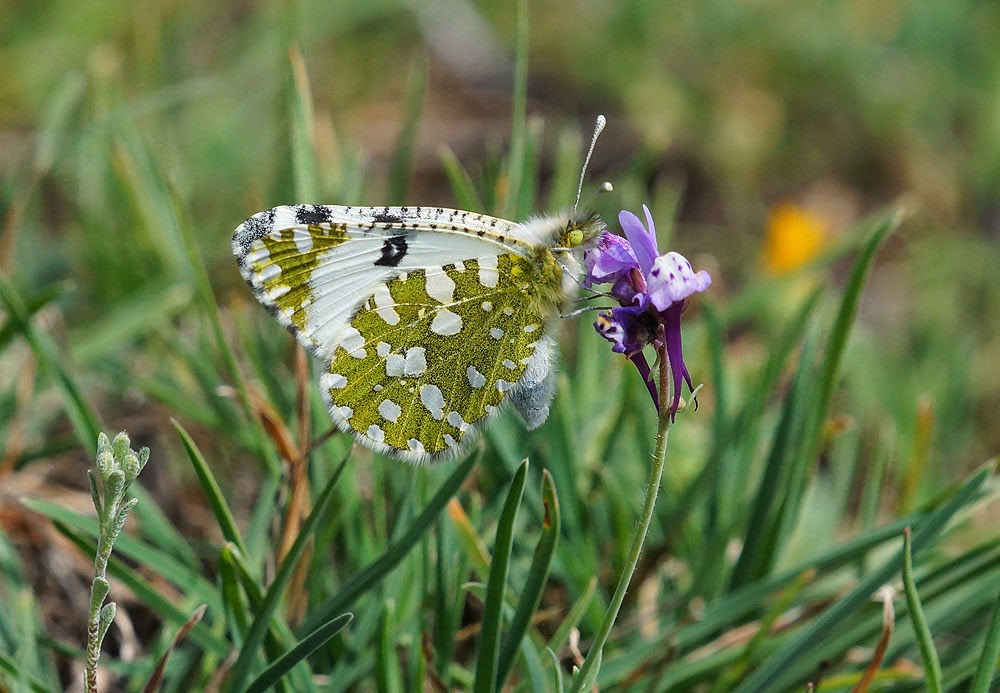 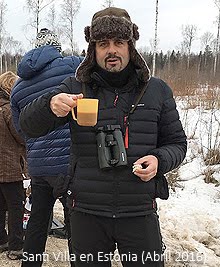